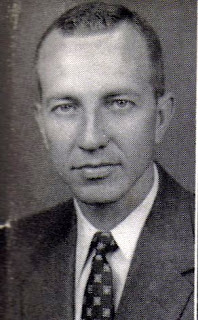 Henry's brother George also played basketball at Indiana State, and the siblings played together with the Falcons. He was a pilot in Europe during World War 2.

After playing with the Detroit Falcons (along with his brother), Pearcy moved on to coach and teach at Worthington High School, and later was principal at Martinsville HS.

Henry married Ruth Shane (b. 1923) on Christmas Eve in 1942 and they had two sons and three daughters.


Stats:
http://www.basketball-reference.com/players/p/pearche01.html
http://www.justsportsstats.com/basketballstatsindex.php?player_id=pearche01
Posted by Peach Basket Society at 8:27 AM