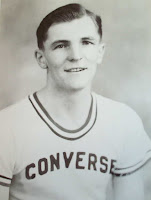 Born in Minnesota to John and Martha Norlander, Johnny attended Roosevelt HS and afterwards moved on to Hamline College where he lead the Pipers to a 1942 championship. After graduating, he served in the U.S. Navy, stationed at Norfolk, and after the war played basketball professionally, primarily with the Washington Capitols. He worked for 23 years as a salesman at Converse.

Johnny married Lois Larson in October of 1943. Following her death in 1962, Johnny remarried to Bernice Anderson Ash in 1963. He had three sons and a daughter.

Stats:
http://www.basketball-reference.com/players/n/norlajo01.html
http://www.justsportsstats.com/basketballstatsindex.php?player_id=norlajo01
Posted by Peach Basket Society at 5:59 AM