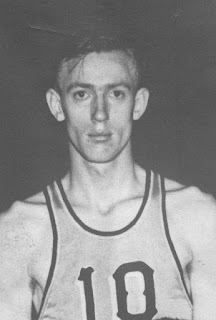 
Born to John and Mamie Mount, "Pete" was a basketball and baseball star in high school. He served in the Army during World War 2, and when he returned, he had college scholarship offers waiting from Purdue, Indiana and Clemson, but his wife, Katie, was expecting, and he chose to play basketball professionally instead (he also turned down an offer to play for the Indianapolis Indians, the local min or league baseball team. He played one season of pro basketball for the Redskins. He worked for many years at the Detroit Diesel Allison Plant in Indianapolis before retiring. Mount died in an apartment fire in 1990.

His son, Rick, played basketball at Purdue, as did his grandson, Rich.

Stats:
http://www.basketball-reference.com/nbl/players/m/mountpa01n.html
http://www.justsportsstats.com/basketballstatsindex.php?player_id=mountpe01
Posted by Peach Basket Society at 6:25 AM