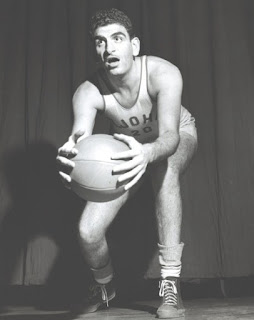 
He injured his knee and missed his freshman year at St John's, but returned as a sophomore to help SJU to a 21-3 record. He enlisted in the army after the season (he was deceptive about his height to avoid the army's 6'6 limit, stradding the scale instead of standing on it.) After the war, he return to St John's. He graduated in 1947, and went on to play basketball professionally for four seasons. He and his wife eventually moved out to Los Angeles, where Harry worked not only as an accountant, but had roles in TV shows like "Frasier" and a couple movies.

He married Lee Goodman (d. 1972) and had two daughters, Amy and Randy, and a son, Terry. He remarried Bea Mondschein Kahn in 1982.