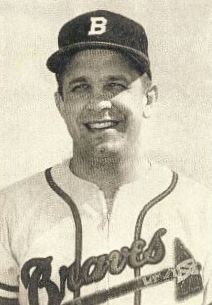 From Shawano, Wisconsin, Reed was not only an All-State basketball player in high school, he also was a very talented tennis player as well as a football and baseball player. He won 16 letters in high school. After graduating, he headed off to college but entered the military, serving in the U.S. Army during World War 2. He signed with baseball's Philadelphia Phillies in 1946, and played with their minor league team in Green Bay. In the off-season, he joined the Oshkosh All-Stars for some time on the basketball court. He was sent to the Boston Braves in 1947, and spent the next few season climbing the baseball ladder before finally making the roster of the Braves at the start of the 1952 season. He was with the team for barely a month, with the second baseman batting .250 in 15 games with no extra-base hits. He was sent back to the Braves' AAA affiliate in Milwaukee, and stayed with the franchise as the moved to Toledo when the Braves themselves moved to Milwaukee. He never go back to the Major Leagues, and was down with professional baseball by the end of the 1955 season. He moved to Houston where he took employment with the American Can Company. He died in Houston in 2005.

I am not sure he ever played college basketball.

Stats:
http://www.basketball-reference.com/nbl/players/r/reedbi01n.html
http://www.justsportsstats.com/basketballstatsindex.php?player_id=reedbi01
Posted by Peach Basket Society at 10:42 AM