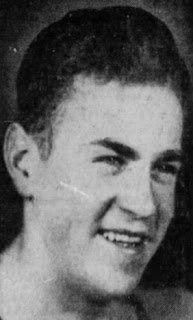 Star and captain of the Southwestern team, Sabo went on to play basketball and football for Wayne State, but quit school in his sophomore year to work for a defense factory. He enlisted in the U.S. Marines in October of 1942, and after his service, he signed the the Detroit Gems, but was let go by the Gems after three games.

Stats:
http://www.basketball-reference.com/nbl/players/s/sabofr01n.html
http://www.justsportsstats.com/basketballstatsindex.php?player_id=sabofr01
Posted by Peach Basket Society at 11:42 AM