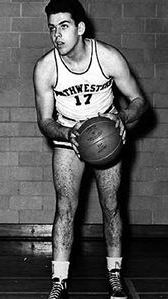 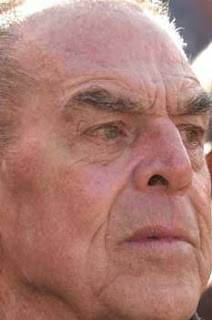 Otto Graham was the son of music teachers and as a youth was quite a french horn player.  and went to Northwestern on a basketball scholarship. However, it was not basketball that would define his career, but football. He joined the NU team as a sophomore after coach Pappy Waldorf saw him playing in an intramural game. He also played baseball while at NU. Graham enlisted in the navy while there, and stayed in school while awaiting a call to duty. In February of 1944, he was moved to Colgate for the Cadet Corps program, and played basketball briefly there. After the war, he played a season of pro basketball with the Rochester Royals, but it was the gridiron where he would make his mark. He joined the Cleveland Browns in 1946 and for the next ten seasons became one of the greatest quarterbacks football has ever seen. He was elected to the Pro Football Hall of Fame in 1965.

Otto had cancer in 1977, and despite beating it, developed heart problems and later, Alzheimer's disease. He died of a heart aneurysm in 2003.

Graham was married to Beverly Collinge and had two sons, Duey and David, and a daughter, Sandra.

Stats:
http://www.basketball-reference.com/nbl/players/g/grahaot01n.html
http://www.justsportsstats.com/basketballstatsindex.php?player_id=grahaot01
Posted by Peach Basket Society at 5:43 AM