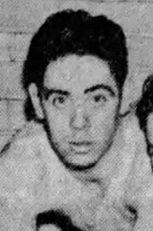 While researcher John Grasso from the APBR was researching, he discovered that Orlyn Roberts had played in a few games with Dayton that first year. He has not been included on historical records as playing in the NBL prior. I was aware of his name having researched his cousin Wyman Roberts, who aside from being his teammate on the Metros, was a teammate for the legendary Waterloo Wonders.

Orlyn contracted tuberculosis in 1930, and was bedridden for many months, and missed a lot of school, and therefore the basketball season. He wound up having to repeat ninth grade, and by the time he reached his senior year, he was declared inelgible to play basketball by the Ohio State iIgh School Athletic Association because he already had played four years of high school basketball. However, under appeal, he was then declared eligible due to his illness in ninth grade that saw him miss virtually the entire season (like a modern-day medical red shirt).


He served in the army during World War 2. He was married twice; first to Jeanette Lenord and later to Eva Irene Drummond. He worked as a school custodian and later operated a grocery store.

Stats:
Posted by Peach Basket Society at 10:28 AM