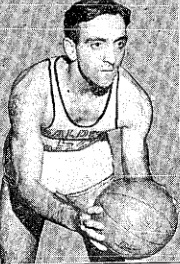 Jack Oberst was born to Ralph and Agnes Oberst, and grew up in Cleveland, Ohio, and started playing basketball while at Fairmount Junior High School. By the time he got to East HS, he was also playing football. He took a year off before attending BW, and after having cartilage removed from his knee, he quit football and concentrated on basketball. He played at BW before the U.S. Navy came a-calling. He entered the service in June of 1942.
He returned to campus in fall of 1945, and rejoined the BW team to captain the squad for his final season.
He was also called "John" and "Jake" at various points.