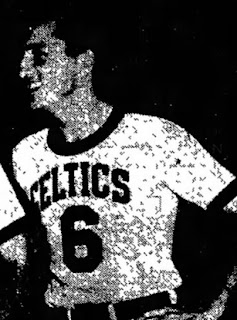 Johnny's brother Connie was a teammate of his for the Celtics.

Simmons served in the Marines during World War 2, and continuredSimmons was more known as a baseball player, playing in the Yankees' and Dodgers farm systems after the war. The outfielder made it to the major leagues with the Washington Senators in 1949, batting just .215 in 62 games without an extra base hit. He returned to the minor leagues afterwards, where he bounced around until 1954.


Stats:
http://www.basketball-reference.com/players/s/simmojo01.html
http://www.justsportsstats.com/basketballstatsindex.php?player_id=simmojo01
Posted by Peach Basket Society at 7:48 AM