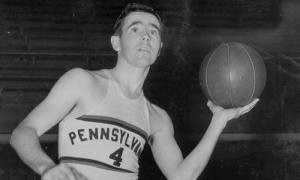 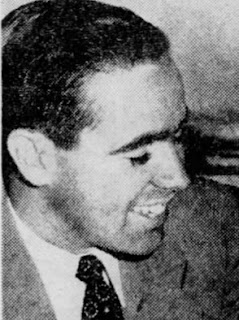 Born in Luzerne to Frank and Mary Crossin. Some places say he is born in 1924. I am going with his military records for correct information, as well as the Philly Inquirer which backs up the 1923 birth year. While at Luzerne HS, Chink once scored 50 points in a 32-minute game. He moved on on to Penn where he was named all-Ameican until he entered the Navy, serving in the Pacific theater. He returned to Penn after the war and after graduating, signed with the Warriors. After, he went to Wilkes-Barre to play for the Barons, but in December of 1950 he quit the Barons over a salary dispute. He signed on to play with Pottsville in the Eastern League. Rumored to be heading to Allentown, he would eventually settle his disagreements with the Barons' ownership and returned to the Barons on December 23. The following season, he would return to being a player and played two more season in the Eastern League.

He turned to politics, serving in the State of Pennsylvania's House of Representatives and later as Luzerne County Commissioner. He died in 1981 following a bout with pneumonia.

Chink's brother John (1927-2005) also played pro basketball, with Williamsport in the EBL, after starring at Villanova.

He married Helen Gutchmonski (1924-2007) and they had three sons and two daughters.


Stats:
http://www.basketball-reference.com/players/c/crossch01.html
http://www.justsportsstats.com/basketballstatsindex.php?player_id=crossch01
Posted by Peach Basket Society at 10:27 AM