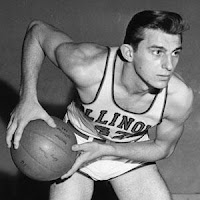 Phillip lead Granite City to the Illinois State Title in his senior year, and the enrolled at Illinois where as one of the "Whiz Kids" he broke the conference scoring record in his junior year. He left school to join the Marines, where he saw combat in the Pacific, including Iwo Jima. After his service, he returned to play at Illinois before graduating. He joined the Chicago Stags in 1947-48, commencing on a 12-year career in the BAA/NBA. One of the more highly-skilled passers the game has ever seen, Phillip's career ended when his knee problems became to much to bear. He tried his hand a coaching, before moving out to California where he worked as a probation officer.

Phillips died of congestive heart failure in 2001 at the age of 79.

He and his wife, Corky, had one son.