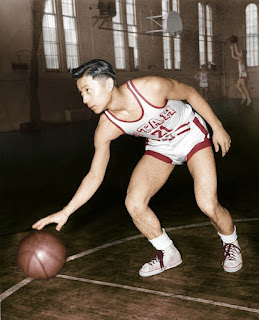 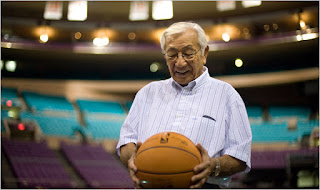 Born in Utah to Japanese immigrants, Misaka was a player larger than his 5'7 frame. A great player at Ogden HS, we went on to Weber Junior College (now Weber State University) and transferred over to Utah, where he helped the Utes to the 1944 NCAA championship. It is worth noting that unlike many Japanese families in America, his family was not forced into internment camps, given the length of time his family had lived in Utah. He left to school to serve in the U.S. Army. He was one member of the occupying force who went to Hiroshima after the Japanese surrender, and witnessed the devastation first-hand. After his discharge, he went back to Utah and lead the to the 1947 NIT title. He was signed by the Knicks (not drafted, despite incorrect claims in many places) and although only playing three games, he was the first non-white player to play in the BAA/NBA. (The NBL had already had many black players and a few Asian players by then, but the BAA was still an all-white league.)

After the Knicks, he was invited to join the all-black Harlem Globetrotters, but declined to return to Utah.

There is a documentary about his life, which can be found for purchase at watmisaka.com.

Stats:
http://www.basketball-reference.com/players/m/misakwa01.html
http://www.justsportsstats.com/basketballstatsindex.php?player_id=misakwa01
Posted by Peach Basket Society at 7:57 AM

Email ThisBlogThis!Share to TwitterShare to FacebookShare to Pinterest
Labels: 1947-48, New York Knicks, over 90