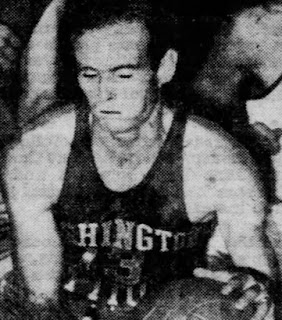 Dick was born in San Francisco to Martin and Hannah O'Keefe. He played basketball at St. James High School and from there went on to Santa Clara. He entered the Marines during World War 2, where he played one season of college ball at the College of the Pacific (now Pacific University). He returned to Santa Clara after his service, and then played four seasons for the Capitols.

He later worked for many years as a security chief for various companies.

Posted by Peach Basket Society at 11:19 AM