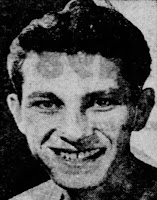 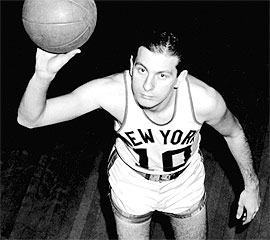 Born in Brooklyn, young Max spent many hours as a kid shooting baskets on Brooklyn playgrounds, perfecting the shot they made him a star at Jefferson HS. He graduated served in the U.S. Navy during World War 2. After the war, he went to St. John's, and after a very successful freshman campaign, he left school to play professional basketball. He played 10 seasons in the BAA/NBA, and when he retired had the third highest point total at the time.

Zaslofsky died of leukemia in 1985.

Max and his wife, Elaine, had two daughters and a son.

Posted by Peach Basket Society at 10:21 AM