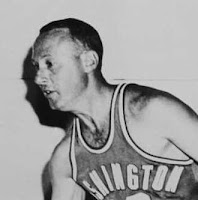 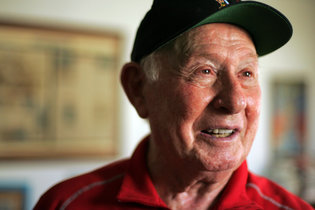 Born in Philly, Klotz lead South HS to two city basketball championships before heading to Villanova. After two years at 'Nova, he left to join the U.S. Army. After a few season of pro ball, including a stretch with the Bullets, Klotz formed the Washington Generals, who were the foil to the Harlem Globetrotters. He played for and coached the Generals for many years, and is the only non-Globetrotter to have a number retired by the Globetrotters.


Klotz played for the Generals through his 50's and was still playing pick-up games in his 80's. He died of cancer in 2014.

He was married to Gloria and had three sons and three daughters.

Stats:
http://www.basketball-reference.com/players/k/klotzhe01.html
http://www.justsportsstats.com/basketballstatsindex.php?player_id=klotzhe01
Posted by Peach Basket Society at 4:50 AM