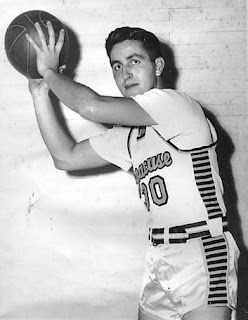 While at Syracuse, Spicer entered the U.S. Army but was discharged after 17 months for medical reasons. He returned to Syracuse and graduated in 1946. He passed the bar in 1947, after playing with the Steamrollers. He returned to Watertown where he worked for the city as legal counsel and later was on the Republican election commission. He coached and player tennis and basketball all the while, winning he city single tennis championship in 1961.

Spicer was 58 when when he died of Parkinson's Disease.

He married Ernestene Blankenship in December of 1947. They had two sons and a daughter. One son, Michael, was involved in a high-profile murder case. He was charged, along with three other men, of murdering Lois McMcMillen in the British Virgin Islands. Eventually acquitted of the crime, Michael still faced obstruction charges.

Stats:
http://www.basketball-reference.com/players/s/spicelo01.html
http://www.justsportsstats.com/basketballstatsindex.php?player_id=spicelo01
Posted by Peach Basket Society at 10:51 AM