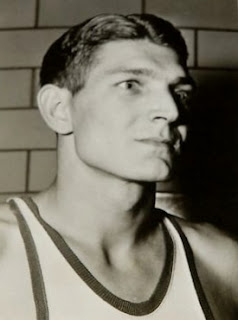 From Clinton, Illinois, Vance was a member of the Illini's "Whiz Kids" in the early 40's. Like his teammates, he left college to serve in the Army during World War 2, and then returned to Illinois after the war. He played pro ball for Chicago, Milwaukee and Tri-Cities, with some time off to serve his country in Korea. He retired to coach high school basketball at LaSalle-Peru High School. He quit in 1956 to work an administrative job for the Illini's alumni organization and later wound up their Athletic Director.

Posted by Peach Basket Society at 6:09 AM