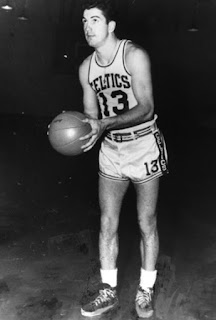 Stump attended St. Rita's in Chicago, and then moved on the DePaul, where he was a prolific scorer and teammate of the legendary George Mikan. Gene played two years for the Celtics before splitting the 1949-50 season between the Lakers and the Hawks.

He married Elizabeth Coakley and they had seven sons and two daughters.

Posted by Peach Basket Society at 11:01 AM