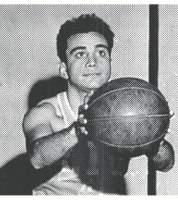 The Bronx native was on the Long Island team that one the NIT in 1941. After finishing school, he served in the army during World War 2. Upon his return, he played professional basketball while getting a law degree during the week. He would practice law for many years and also became a real estate developer.

He and his wife, Bernice, had two sons and a daughter.

Posted by Peach Basket Society at 11:15 AM