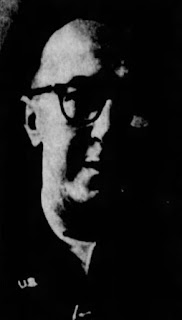 Born to Sam and Alive Seeders, Jerry played baseball and basketball at Pottstown HS. After high school, Seeders went to the Dean Academy in Franklin, Massachusetts and then Massanutten Military Academy. He enrolled at the University of Pennsylvania and graduated in 1940. Seeders enlisted in the U.S. Army in February of 1941 and served during World War 2, seeing action in the European Theater. He took shrapnel in his right foot at Dunkirk. After the war, he played a couple seasons of basketball before taking the coaching job at Ursinus College. He left coaching when the Korean War flared up, and spent that war first stationed in Japan before going to the battlefront. After that conflict ended, he returned to the US and moved to Memphis to work for Rustcraft Greeting Cards. Eventually his job there turned into a district managerial position and he moved to the DC area. He contracted polio in 1958 and died at the age of 41.

He married Beatrice Geise in 1942 and they had two sons and a daughter.

Posted by Peach Basket Society at 9:24 AM

Email ThisBlogThis!Share to TwitterShare to FacebookShare to Pinterest
Labels: 1945-46, under 50, Wilmington Bombers