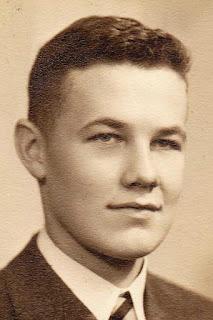 
Born and raised in Eau Claire, Wisconsin, Simpson went to Eau Clair Teachers College for a year before entering West Point. The son of a colonel, Simpson followed his fathers footsteps into the army, as did his brother, George, a football player at Purdue.

Simpson served in the U.S. Army Air Corps during World War 2 and in the European Theater flew 102 missions and 193 sorties. He was awarded a silver star, distinguished flying cross and 8 oak clusters among other medals and citations. While on weekend leave during the 1945-46 season, he played briefly for the Wilmington Bombers. Still in the service, he was returning home to Eau Claire on September 20, 1946, when the flight was grounded due to bad weather. After a delay, the plane got clearance to depart, and crashed shortly after takeoff, killing Captain Simpson and the four other men on board.

Posted by Peach Basket Society at 9:44 AM

Email ThisBlogThis!Share to TwitterShare to FacebookShare to Pinterest
Labels: 1945-46, under 50, Wilmington Bombers