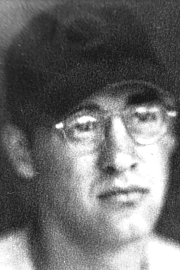 Eisenhart was signed by the Cincinnati Reds baseball club in 1944 and would pitch one-third of an inning of major league baseball. (He would throw this one-third of an inning in the same game that Joe Nuxhall became the youngest player in MLB history). He joined the U.S. Army shortly afterwards and would play one game of basketball for the Trenton Tigers while out east. After the war, he played as little minor minor league baseball but never returned to the majors. He would work as a mathematics teacher and coach at Bordentown Military Institute and Pennsbury High School in Pennsylvania before retiring in 1982.

Posted by Peach Basket Society at 10:16 AM