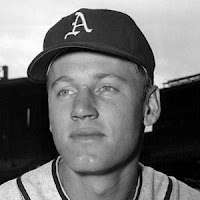 After Thomas graduated from high school, he served in the U.S. Navy during World War 2. After the war, he attended KSU but signed with the New York Yankees in 1947, assigned to their Joplin affiliate in the Western Assocation. He also played basketball with the Kansas City Blues in the PBLA. An outfielder with decent power, Thomas climbed the minor league ranks until being selected by the Philadelphia Athletics in the Rule 5 draft in November of 1951. He played two seasons in the Major Leagues before returning to the minor leagues. He eventually moved to North Carolina where he operated over 30 Pizza Hut franchises.

Stats:
http://www.justsportsstats.com/basketballstatsindex.php?player_id=thomake02
http://probasketballencyclopedia.com/player/kite-thomas/
Posted by Peach Basket Society at 4:07 AM