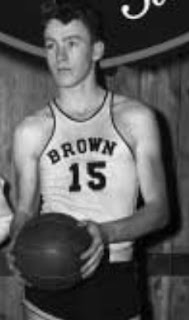 
Mahoney was a three-sport star at Brown. On the basketball court, he average 17.4 point per game of two and a half years, while on the gridiron, he played played both offense and defense and had seven interceptions against Princeton in 1949. After graduating, he had offers from the the NFL's Philadelphia Eagles and baseball's Chicago White Sox as well as being drafted in the 1950 NBA draft by the Celtics. He went into the U.S. Army instead, serving in Korea before returning to basketball. He played with the Pawtucket Slaters before joining the Boston Celtics in 1953. He played with the Baltimore Bullets the next year before his NBA career came to an end. He coached some after that while also working as an electrician and teaching English at Berkshire Community College.

Mo and his wife had two sons and two daughters.

Posted by Peach Basket Society at 5:40 AM