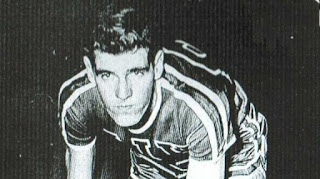 Ackerman, a talented player at LIU, signed with the Jersey City Titans in October of 1952, but after the club was denied entry into the ABL, he signed with the Manchester team. He average 12.4 points for the BA's, missing a few games due to his honeymoon. He was invited to the New York Knicks camp the following fall, played 28 games with the Knicks that season. He was traded to the Celtics after the season, but Ackerman declined to play, wanting not to live in Boston. He started a successful landscaping business that he ran for over 40 years. In 1970, he started a CYO basketball porgram at St. Anthony's on Long Island and coached many youths over the years.

Stats:
https://www.basketball-reference.com/players/a/ackerdo01.html
Posted by Peach Basket Society at 7:35 AM