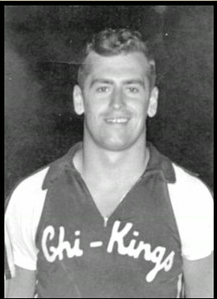 Burn to Harry and Lillian Earle, Edwin entered the U.S. Navy right out of high school, but World War 2 ended shortly afterwards and eh was discharged. He enrolled at Loyola University in Chicago and in three of his four years there, the Ramblers won 20 games. He started playing softball as he finished college. He played basketball in the ABL and NBA, but was a very well-known player in the world of 16-inch softball. He would eventually be inducted into the 16 Inch Softball Hall of Fame. Earle worked in the sales department for Yellow Frieght Systems in Chicago.

Stats:
https://www.basketball-reference.com/players/e/earleed01.html
Posted by Peach Basket Society at 11:54 AM