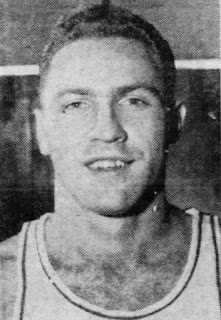 Bunt was drafted in the 3rd round of the 1952 NBA Draft by the New York Knicks. He started the 1952-53 season with the Knicks but was sent down to the Manchester club in December of 1952 but was recalled a couple weeks later. In February of 1953, Bunt was released by the Knicks and signed with the Baltimore Bullets on February 14, 1953. He quit basketball to go into teaching. He served as the assistant athletic director for the Flushing YMCA, and would coach basketball and swimming as well as teach at Richmond Hill, Bryant and Monroe High School in the Bronx. He retired in 1991.

Bunt and his wife had two sons and one daughter.

Source:
Everything You Ever Wanted to Know About the New York Knicks, Michael Benson, 2012

Stats:
https://www.basketball-reference.com/players/b/buntdi01.html
https://www.justsportsstats.com/basketballstatsindex.php?player_id=buntdi01
Posted by Peach Basket Society at 4:42 AM