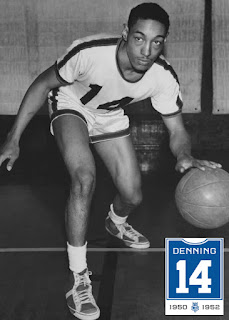 Denning, whose real name was Mitchell, was born in Kentucky bur moved to live with his aunt and uncle in Pittsburgh when he was 2. He moved with his aunt and uncle to Detroit in 1942, and Blaine starred in basketball while at Northern HS. He briefly attended Central State College in Ohio before transferring to Lawrence Tech in the Detroit suburb of Southfield. After graduating from LIT (now LTU) in 1952, Denning signed on to play with the Harlem Globetrotters. He was drafted by the Baltimore Bullets and played with the ABL's Elmira Colonels before being called up by the Bullets. He scored five points in his only NBA game, and was sent back to Elmira shortly afterwards. Lawrence Tech eventually dropped athletics all together, but in the 2010's. when the school brought back varsity sports, Denning was one of the first people inducted into the school's hall of fame, and his number was retired.

Blaine legally changed his name to Denning in the 60's.


Stats:
https://www.basketball-reference.com/players/d/dennibl01.html
https://www.justsportsstats.com/basketballstatsindex.php?player_id=dennibl01
Posted by Peach Basket Society at 9:25 AM