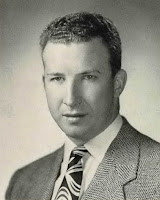 Born to Robert and Caroline McLarnon, Bob went to St. Nicholas of Tolentine High School but did not play basketball there. He entered the U.S. Army after graduating, and it was there that he grew into his basketball-playing frame, playing while stationed in the Philippines. By the time he left the army and went to Holy Cross, he was a tough player with good offensive skills. In 1952, McLarnon signed with the Manchester BA's in the ABL.

Stats:
Posted by Peach Basket Society at 6:54 AM