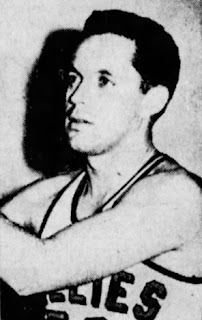 Brasco played his college ball at NYU, and he was subpoenaed to give testimony in the point shaving scandal that rocked college basketball in 1951. Brasco was offered money but he refused to accept. After NYU, Brasco would be drafted by the Syracuse Nationals in the 1952 NBA Draft. He was sold to the Milwaukee Hawks a month into the 1952-53 season, and after the the Hawks let him go, he signed with the Elmira Colonels on February 25, 1953. He scored four points in his only appearance with the Colonels. He was signed by the Hazleton Hawks in the Eastern League. In January of 1954, he was promoted to player / coach. He played a few more season in the EBL.

Stats:
https://www.basketball-reference.com/players/b/brascji01.html
https://www.justsportsstats.com/basketballstatsindex.php?player_id=brascji01
Posted by Peach Basket Society at 9:48 AM