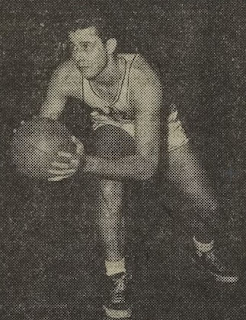 Carlson, a 6'8, 225-pound center who starred at Fordham, was drafted by the Fort Wayne Pistons in the 3rd round of the 1952 NBA draft. He never played with the Pistons, but played three games for the Middletown Guards in the ABL.

Bill and his wife, Anne, had two daughters.

Stats:
Posted by Peach Basket Society at 6:17 AM