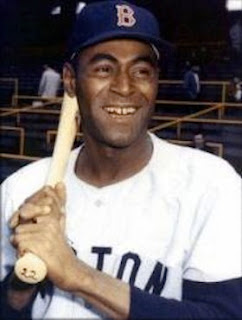 Born in Norristown, Pennsylvania, to John and Queen Harrell, the Harrell family moved to Troy, New York, in 1929. Harrell starred on the baseball diamond and the basketball court in high school, and Harrell was the first black baseball player to be invited to the annual Hearst Sandlot Classic. After graduating high school, Harrell went to Siena on a basketball scholarship. He played both sports there, also, and set a school record for rebounding average in a season that stood for 60 years. After graduating, he received offers to join the Harlem Globetrotters and the Indianapolis Olympians of the NBA. He declined and signed with the Cleveland Indians. He did play some basketball that winter, though, with the Saratoga Yankees of the ABL, which was convenient and close to home. 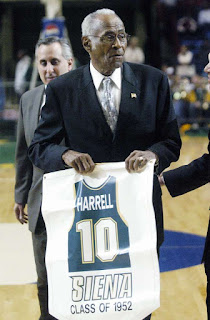 An infielder with good defensive skills, Harrell quickly climbed through the minor leagues, and after batting .307 for the Indians triple-A club in Indianapolis in 1954, he was promoted to the major leagues in 1955. He would bounce between the minor leagues and the major leagues over the next decade, spending three partial seasons with the Indians and part of the 1961 season with the Boston Red Sox. His last season as a baseball player was in 1966 with Toronto in the International League, where he would also coach that year. He wound up working in Albany at the New York Department of Corrections, working with juvenile offenders to help straighten out their lives. He would be a fixture at Siena basketball games for years, until his death in 2014.

Billy married Vivian Agana in 1952 and they had five children. They divorced in 1981m and he remarried to Miriam Canty in 1987.

Stats:
Posted by Peach Basket Society at 6:23 AM