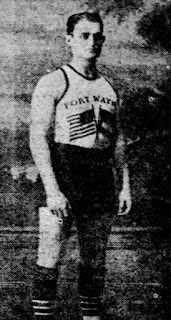 White was a star on the Franklin High School State Champion team in 1920, and would move on to DePaur. He would play pro basketball for a few years while going to Indiana University to study for his masters degree. He would serve as principal and coach at New Haven High School for 16 years before moving to Urbana, Ohio, in 1943. There, he took work as a district manager for Morgan Trailer Company.

White was shoveling snow in December of 1952 when he suffered a fatal heart attack. He was 49 years of age.

He was married to Waneta Brattin and they had two daughters and a son.

Email ThisBlogThis!Share to TwitterShare to FacebookShare to Pinterest
Labels: 1926-27, Fort Wayne Hoosiers, under 50