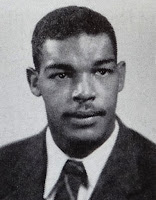 Born in D.C., Ford was a football and basketball player in college as well as professionally. After a year at Morgan State, he enlisted in the U.S. Navy but was discharged a short time later as World War 2 came to a close. He moved on to the University of Michigan where he became an all-pro football player. He played basketball professionally briefly for Dayton, but he turned in a professionally football career that spanned 11 season. as a defensive end primarily for the Cleveland Browns, he was inducted into the Pro Football Hall of Fame in 1976, four years after his sudden death from a heart attack at 46 years of age.

Len was married to Geraldine Bledsoe and they had two daughers prior to their 1959 divorce.

Stats:
http://www.basketball-reference.com/nbl/players/f/fordle01n.html
http://www.justsportsstats.com/basketballstatsindex.php?player_id=fordle01
Posted by Peach Basket Society at 11:28 AM

Email ThisBlogThis!Share to TwitterShare to FacebookShare to Pinterest
Labels: 1948-49, Dayton Rens, NFL, under 50