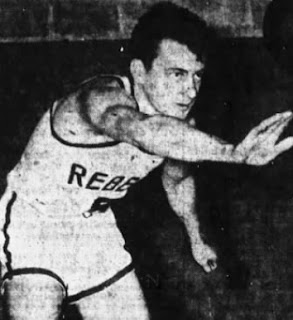 Bob was born to Mr. and Mrs. Joseph Skarda in New York City. A graduate of Stuyvesant High School, he attended Tufts, Skarda signed with the Baltimore Bullets but was transferred (sold?) to the Rebels in the Southern League. He played there through at least February. Not sure when he moved up to Moline to join the Blackhawks. He served in the U.S. Navy during World War 2.

Stats:
http://www.basketball-reference.com/nbl/players/s/skardro01n.html
http://www.justsportsstats.com/basketballstatsindex.php?player_id=skardbo01
Posted by Peach Basket Society at 6:32 AM