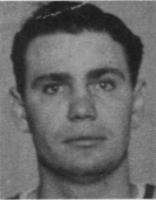 Born in Bay City or Floyd and Anna Bakeraitis, Art was an prominent athlete in the Bay City area, playing basketball, football and baseball. He signed with the Vagabond Kings, playing one season in the NBL before the Kings left the league. Art served in the Pacific during World War 2, spending time in the Philippines and the Solomon Islands.

He was married to Grace Borchart in 1953.

http://www.justsportsstats.com/basketballstatsindex.php?player_id=bakerbo01
Posted by Peach Basket Society at 7:06 AM