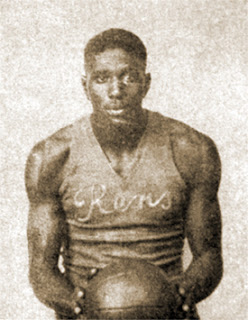 DeZonie was a talented basketball player who played with the New York Rens for many years before playing with Paterson in the ABL. He joined the Dayton Rens, who became a member of the NBL when the Detroit franchise dropped out a couple months into the season. However, when the NBL merged with the BAA to form the NBA, the all-black Rens were not one of the teams invited to join. Not able to play with the all-white NBA, DeZonie returned to the ABL to play with the Harlem Yankees for a season. Finally, in 1950, DeZonie, along with Chuck Cooper, Earl Loyd and Sweetwater Clifton, signed with NBA teans to become the first black players in the NBA, forever breaking the color barrier in the league. However, he only played briefly for the Blackhawks before quitting the team, citing the racist climate there. He returned to the ABL for one more season.
Later in life, he operated a popular nightclub and was also a fairly accomplished drummer.

He was married to Ethel and they had two sons.