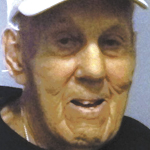 Born in Tennessee to John and Sarah Crocker, Dillard's family moved to Niles, Michigan, when he was young. He lead Niles High School to the state basketball championship in 1943, and enlisted in the army after graduating. He enrolled at Western Michigan after the war, and after school, played professional basketball for five years. After his playing days, he owned and operated Crocker Sheet Metal Shop in Niles. I haven't found anything saying he actually played basketball at the collegiate level (Western Michigan or otherwise).