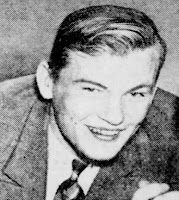 Smick played baseball, football and basketball at UM. In June of 1939, he signed on to play minor league baseball with the Milwaukee club of the American Association but has assigned to Hopkinsville (KY) in the Kitty League. After playing minor league baseball for a few years as a pitcher and outfielder, he tried his hand at professional basketball, playing for Flint/Midland. In January of 1942, nagging injuries lead him to call it quits in his athletic career, but we returned years later with the A.C.'s.

1940 census says he was born in Poland, but no other source says this.


Stats:
http://www.basketball-reference.com/nbl/players/s/smickda01n.html
http://www.justsportsstats.com/basketballstatsindex.php?player_id=smickda01
Posted by Peach Basket Society at 10:20 AM