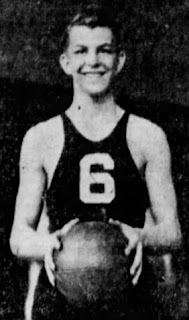 Birr was an All-American football and basketball player at Indiana University. In February of 1938, Birr was declared ineligible from Indiana University's basketball squad for failing to turn in a term paper. He was drafted by the Green Bay Packers in the 1938 NFL draft. During World War 2, Birr served aboard the USS Belleau Wood and received a Bronze Star and a Purple Heart. Later in life, he ran for Mayor of Indianapolis, founded the New York Titans team of the AFL, and created and published the magazine "Movie Digest." In later years, he moved to Florida where he became a real estate developer, and was involved with the development of the Daytona International Speedway.
Birr was married to Virginia Miles (1918-2008) in 1941 and they had three sons: James, Stephen and Jeffrey.

Stats:
http://www.basketball-reference.com/nbl/players/b/birrja01n.html
http://www.justsportsstats.com/basketballstatsindex.php?player_id=birrji01
Posted by Peach Basket Society at 9:57 AM