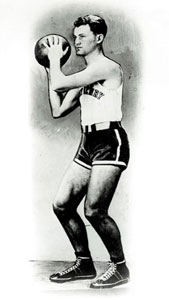 
Glenn Roberts was born in Wise, Virginia to Charlie and Orlena Roberts, and graduated from Pound High School in 1931. He played basketball and Emory and Henry College, scoring a remarkable 2013 points in four years. After playing for Dayton, he moved over to the Akron Firestones the next season and played one game to Toledo of the NBL a few seasons later. During World War 2, Roberts and four of his brothers put together a barnstorming team to sell war bonds. He worked at Firestone until 1964, when he took the head coaching job at Clinch Valley College of the University of Virginia where he stayed for two seasons. He also started a tire business with his two sons, Glenn and Larry, back in his hometown in Pound. One of the early users of the jump shot, Roberts died in 1980.

Stats:
http://www.basketball-reference.com/nbl/players/r/robergl01n.html
www.justsportsstats.com/basketballstatsindex.php?player_id=robergl01
Posted by Peach Basket Society at 10:24 AM