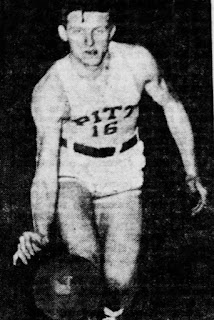 Played one year at Pitt before embarking on a professional and semi-professional basketball career. He was a B-24 pilot in Europe during World War 2.
Fabel died from lung cancer in Pittsburgh at 49 years of age.

Update 5/6/2016
His obituary in the Pittsburgh Post-Gazette says he was 49, not the 53 years of age he was previously listed at. This makes more sense when considering being 53 means he was a 23-year old sophomore in college. His old birthdate of September 4, 1913 is in doubt. Not to mention he graduated from East Pittsburgh in 1935, which would make him a 22-year old high school senior, with the 1913 birth date. His WW2 military compensation application gave us his birthdate and city of birth, filling in what was missing from his obituary.

Joseph A. Fabel, born in 1917 to Joseph and Helen Fabel and married Mary Jane McKee.

Stats:
http://www.basketball-reference.com/nbl/players/f/fabeljo01n.html
http://www.justsportsstats.com/basketballstatsindex.php?player_id=fabeljo01
Posted by Peach Basket Society at 11:16 AM