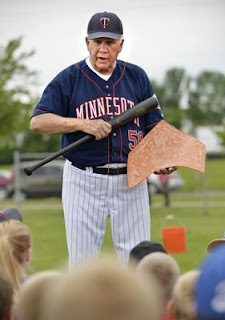 Born in North Dakota, Mauer and his family moved to St. Paul when Ken was young. There were six Mauers brothers, and all six played professional baseball. Ken was a better baseball player than he was a basketball player, and signed with the Brooklyn Dodgers in 1944 when Mauer was only 17, and played with the St. Paul affiliate. He played minor league baseball through 1948, and attended St. Thomas College, where he starred on the basketball team. He played for the St. Paul Lights in the NPBL.

Mauer and his wife, Thelms, had five sons and two daughters. Mauer's son, Kenneth Jr, was an NBA referee, another son, Tom, was a referee in the WNBA. Kenneth's great nephew is Minnesota Twins' star Joe Mauer.

Stats:
http://www.justsportsstats.com/basketballstatsindex.php?player_id=mauerke01
http://probasketballencyclopedia.com/player/kenny-mauer/
Posted by Peach Basket Society at 11:01 AM

Email ThisBlogThis!Share to TwitterShare to FacebookShare to Pinterest
Labels: MiLB, NPBL, over 90