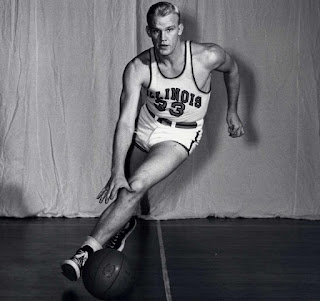 After leading Rockford East to an Illinois State Basketball Championship, Erickson went to Illinois where he played in every Illini game in his four years there. He was drafted by the Tri-City Blackhawks but instead chose to play the the St. Paul Lights in the short-lived NPBL. After a couple of seasons with the Harlem Globetrotters, Erickson coached the varsity basketball squad at Freeport High School for a couple years. He was then the first basketball coach at Rockford College, hired in 1955 and lead the team for a few years. After leaving Rockford College, he was personnel director for Elco Tool and Screw in Rockford and later was assistant vice president of American National Bank.

Stats:
http://www.justsportsstats.com/basketballstatsindex.php?player_id=erickbi01
http://probasketballencyclopedia.com/player/bill-erickson/
Posted by Peach Basket Society at 11:58 AM