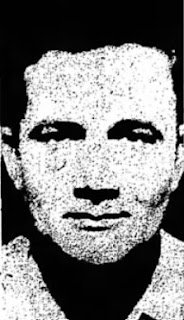 After graduating from Muncie Central, Allen entered the U.S. Navy to serve during World War 2. After the war, he attended Ball State and Oklahoma A&M (now Oklahoma State University). He moved to Anderson, where he played basketball for the Packers in their once NPBL season. He would then go on to work the Welker Ford Agency, and in 1957 took a job as a sales manager for the Edsel Division at Ford Motor Company. However, in early April of that year, he underwent an operation and died a week later from complications. He was only 33 years old.

Stats:
http://www.justsportsstats.com/basketballstatsindex.php?player_id=allenfr01
Posted by Peach Basket Society at 7:00 AM

Email ThisBlogThis!Share to TwitterShare to FacebookShare to Pinterest
Labels: Anderson Packers, NPBL, under 50