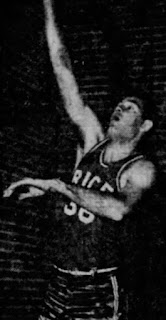 
On September 19, 1950, Tom signed with the Anderon Packers on the NPBL, but on October 27, just a week before the season opener, he was sold to Louisville. He stayed with Louisville for a couple weeks, but on November 14 he left to serve in the U.S. Army, helping to fight the Korean War.


Stats:
http://www.justsportsstats.com/basketballstatsindex.php?player_id=tombi01
http://probasketballencyclopedia.com/player/bill-tom/
Posted by Peach Basket Society at 10:57 AM