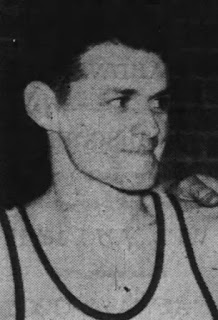 Wood enlisted in the USMC on December 8, 1941, and spent World War 2 in the South Pacific. After the war, he enrolled at Northern Illinois Teachers College (now Northern Illinois University). After three fine seasons with the Huskies (he went to school in the summer to graduate quicker), Wood signed with the Sheboygan Redskins in August of 1949. He got his Masters Degree and went into teaching, spending 30 years of education culminating as a principal at Guilford High School in Rockford, Illinois.

Wood married Jane in 1949, and they had one daughter and two sons.

Stats:
https://www.basketball-reference.com/players/w/woodbo01.html
http://www.justsportsstats.com/basketballstatsindex.php?player_id=woodbo01
Posted by Peach Basket Society at 4:16 AM

Email ThisBlogThis!Share to TwitterShare to FacebookShare to Pinterest
Labels: 1949-50, over 90, Sheboygan Redskins