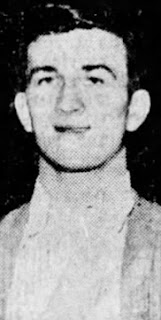 Kersulis was a two-sport athlete (basketball and football) at East St Louis HS and at Illinois, setting Illini receving records on the gridiron. He served in the U.S. Army after his freshman year but returned to college after the war. After playing some pro basketball for the Louisville club in the NPBL, Kersulis moved to Richmond, Virginia, where he worked at Reynolds Metal as a manager of the data processing department. We died of leukemia in 1973 at the young age of 46.

Stats:
http://www.justsportsstats.com/basketballstatsindex.php?player_id=kersuwa01
http://probasketballencyclopedia.com/player/walt-kersulis/
Posted by Peach Basket Society at 4:44 AM

Email ThisBlogThis!Share to TwitterShare to FacebookShare to Pinterest
Labels: NPBL, under 50