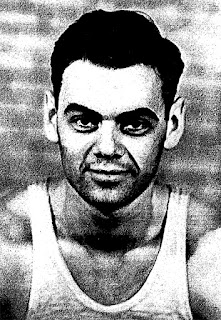 Born to Clarence and Leona Huffman. Huffman played basketball at Indiana, where he was awarded as MVP of the 1940 NCAA Tournament.

His brother Vern also played professional basketball (as well as played in the NFL).

Stats:
http://www.basketball-reference.com/nbl/players/h/huffmma01n.html
http://www.justsportsstats.com/basketballstatsindex.php?player_id=huffmma01
Posted by Peach Basket Society at 5:52 AM